1. Divide your students into teams of 3–4. If you have any students that you know are good at making paper airplanes, make sure you split them up. Let each team come up with a team name and write it on their worksheets. 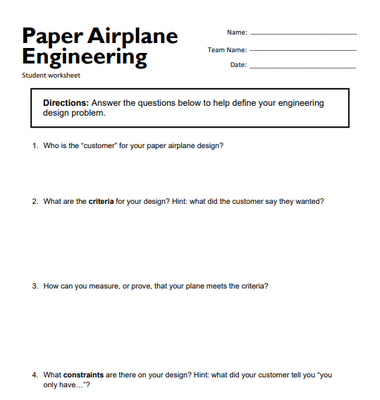 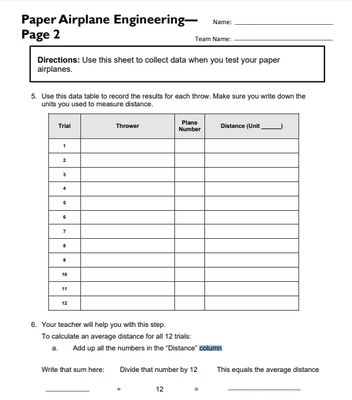 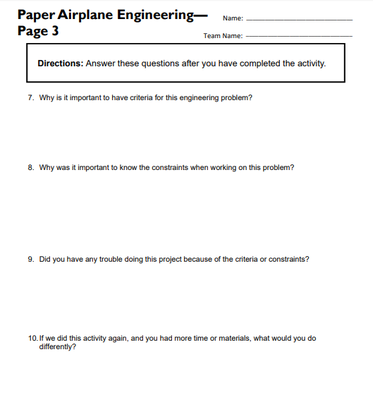 2. Explain that there are a few rules to make sure everyone participates (this is to prevent one experienced student in each team from making and throwing all the planes). After deciding on a final design, each team will make and test four planes. Within each team:

3. Distribute an equal amount of materials to each team. Each team should have at least 12 pieces of paper for testing paper airplane designs. You can decide what quantities to use for any of the optional materials (e.g. one roll of tape, one pair of scissors, four paper clips).

4. Explain how your students will approach this as an engineering problem. Students can follow along on the worksheet, individually or in teams, to identify the criteria and constraints of the problem. You can use this worksheet as a formative assessment to measure their understanding.

5. Give the class 15 minutes to experiment with different paper airplane designs and decide on a final design for their teams.

6. Give each team five minutes to decide how they will build four copies of their design. Remember that each student must participate in making the planes. They should write their team name and plane number (1–4) on each plane, but this does not count as a step (i.e. they cannot just assign one student to do the writing while everyone else folds). If they choose an "assembly line" process, they should decide who will make which folds. If they decide to have each student make one plane (note: in teams of three, one student will need to make two planes), they should make sure everyone knows how to make a plane by themselves.

7. Give each team five minutes to build four copies of their design.

8. Let each team show the customer the performance of their final design, and record their results on the student worksheet.

Figure 2. How to measure forward distance the plane travels, from where it was thrown to where it lands.